Herefordshire Archive and Records Office
1 March to 29 April 2022, Tuesdays to Fridays, 10am to 4pm (no need to book) 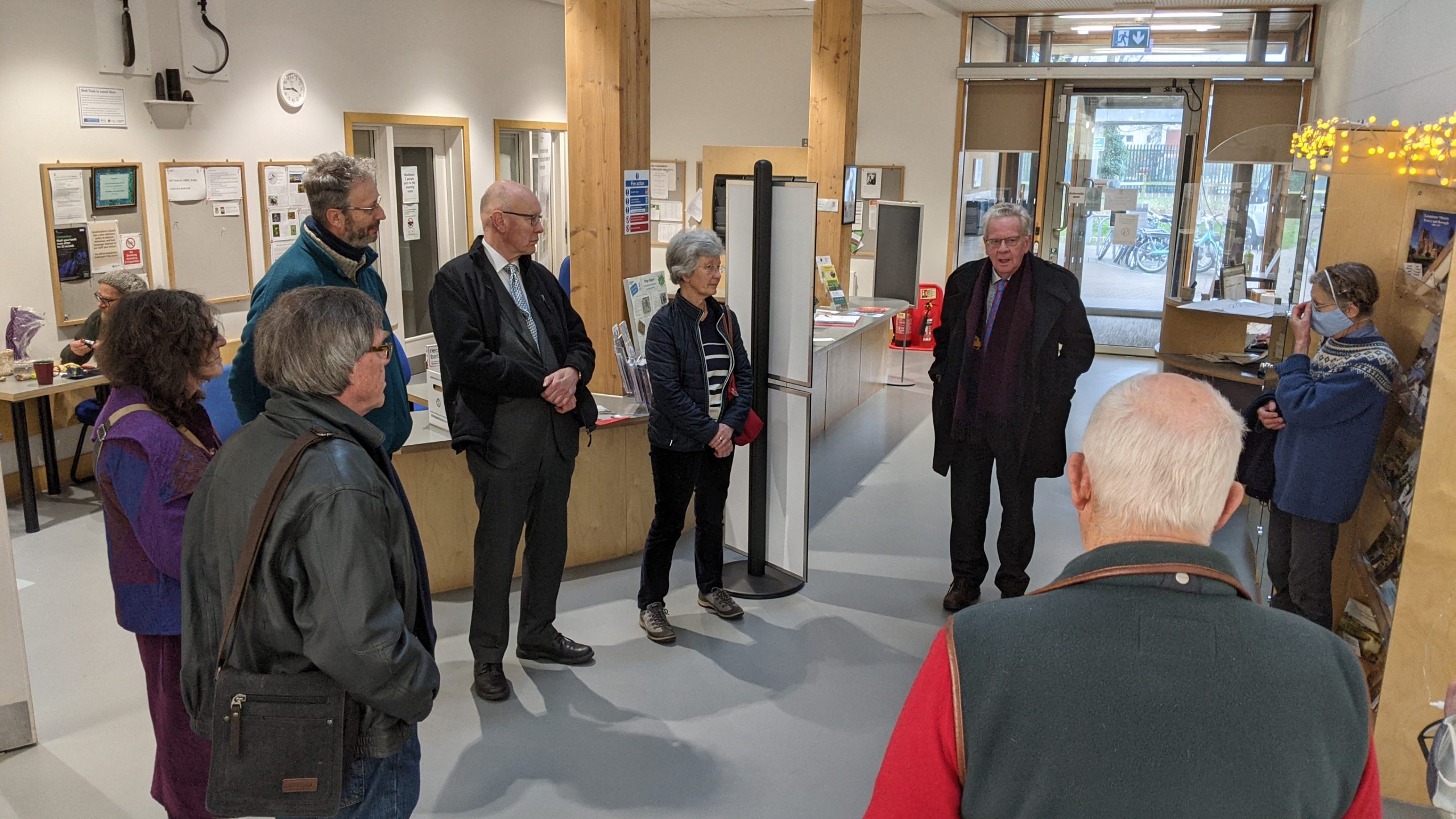 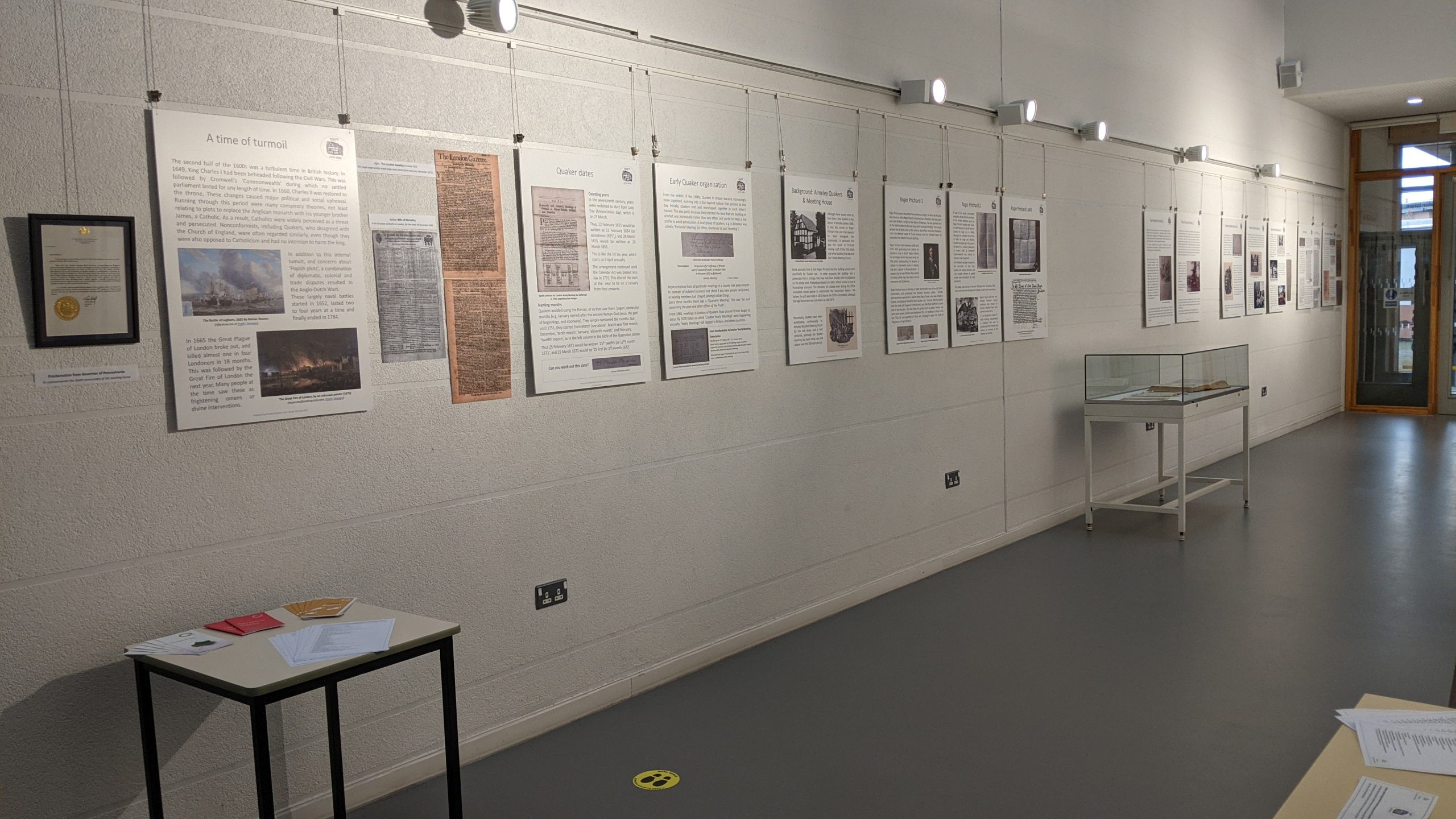 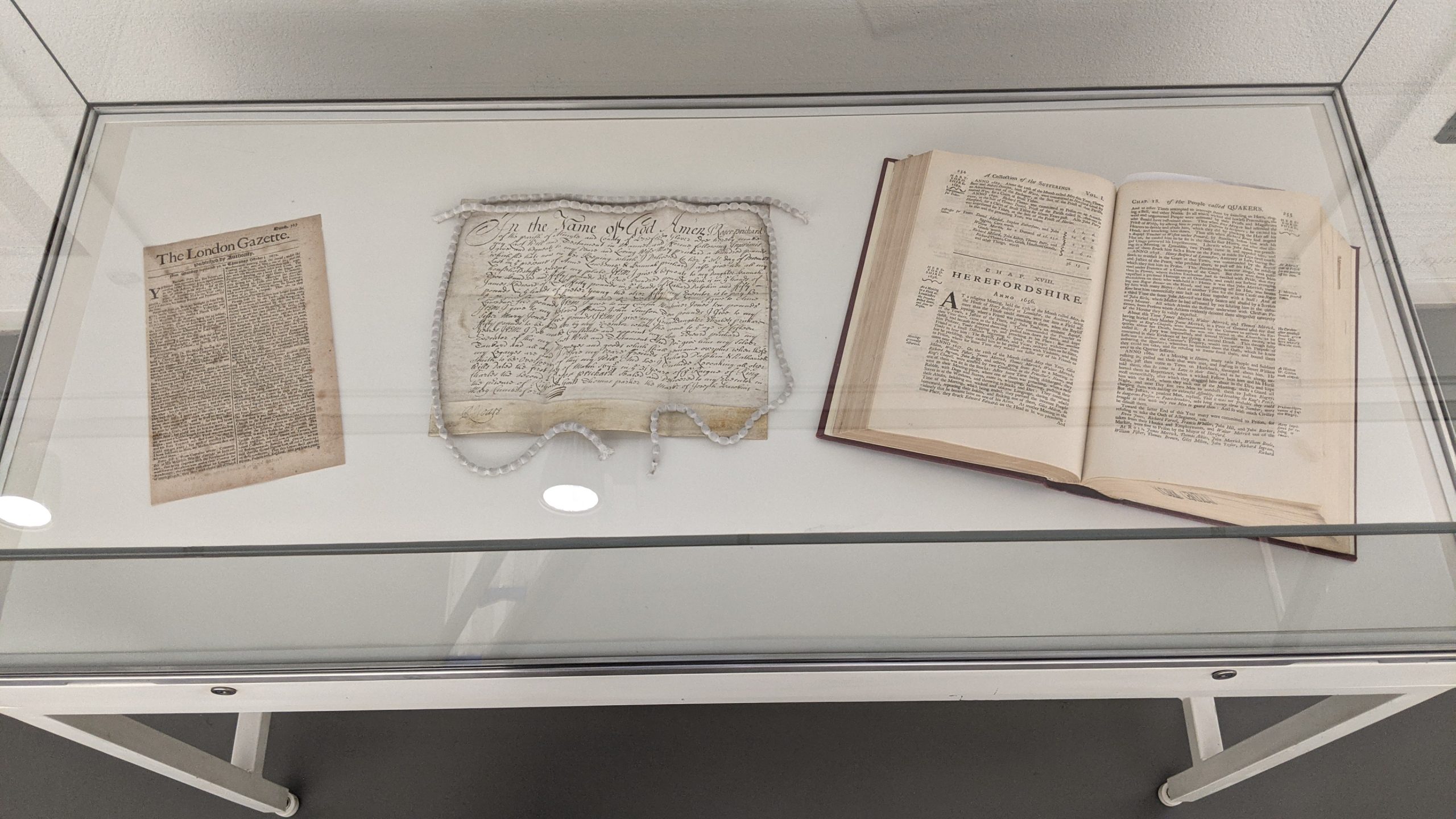 A collection of twenty-seven panels, eleven facsimile documents and three artifacts have been assembled to document the history of the building, the family who donated it to the Quakers, and their connection with the establishment of Pennsylvania in 1682, by William Penn. It sets this is the context of political, cultural and religious turmoil at the time.

On a rather grey, damp St David’s Day afternoon, a small gathering of people assembled for the official opening of the exhibition compiled by the Almeley Meeting ‘anniversary history group’. The Clerk of Southern Marches Area Meeting, John York Skinner, gave a short address to mark the occasion, noting the proclamation form the Governor of Pennsylvania. Michael Tavinor, previous Dean of Hereford Cathedral, reported that the Quaker Joseph Besse, in his 1753 volume ‘Collection of the Sufferings of the People called Quakers’ (of which there’s a copy on display at the exhibition) decribes in detail an attack on the Quaker meeting house in Hereford by townspeople—including choirboys from the cathedral, no doubt with the knowledge of the then Dean. He celebrated the improvement in relationships between the denominations, and faiths, in Hereford since then!

Two descendants of Roger Prichard, the original owner and donor of the meeting house were present: David Whiting, a member of Almeley Meeting and also of the historical group; and Celia Southall a second cousin of his. Ruth Stanier represented Hereford Meeting. Rhys Griffiths, Senior Archivist at HARC was also present.

The visitors remarked that they had learned a lot from the panels and found the exhibition fascinating. Sections of the exhibition will be on display at various venues, and will be available for loan.

The panels are available below as a pdf download (NB large file—14MB)
For further details, please contact Almleley350@AlmeleyQuakers.org.uk

Below is a catalogue of the exhibits,
and underneath a PDF document with the 27 panels.

Meeting for Worship
Quakers (referred to as Friends) usually meet every Sunday at 10.45am in the Meeting House (subject to Covid isolation rules). The meeting lasts for an hour.

Once a month there is a young people’s meeting.

The cookies used on this site do not collect any personal information but are necessary for the correct operation of the site. By clicking “Accept”, you consent to the use of ALL the cookies.
Cookie settingsACCEPT
Manage consent

This website uses cookies to improve your experience while you navigate through the website. Out of these, the cookies that are categorized as necessary are stored on your browser as they are essential for the working of basic functionalities of the website. We also use third-party cookies that help us analyze and understand how you use this website. These cookies will be stored in your browser only with your consent. You also have the option to opt-out of these cookies. But opting out of some of these cookies may affect your browsing experience.
Necessary Always Enabled
Necessary cookies are absolutely essential for the website to function properly. This category only includes cookies that ensures basic functionalities and security features of the website. These cookies do not store any personal information.
SAVE & ACCEPT